I've had a substantial sum of money with Ratesetter for 2 years. How's it gone?

Warning: We are not currently in “normal market conditions”: as a result of COVID-19, there's a supply/demand imbalance and many lenders will only allow access to your funds slowly if at all. It also remains to be seen how each lender's underlying loans will perform. Proceed with extreme caution until this situation is resolved and things are clearer.

Ratesetter is one of the oldest peer-to-peer lending platforms. It launched in 2010 at almost exactly the same time that Lady Gaga released Bad Romance, although these two events are thought to be unconnected.

It's also one of the biggest: £3 billion has been invested through the platform in total, with over £850m out on loan right now.

If you want more background about peer-to-peer investing in general, read my modestly titled “Ultimate Guide” to peer-to peer lending.

Who does Ratesetter lend to?

Ratesetter lends to three different categories of borrower. As of May 2019, Ratesetter report that their current loans across these categories break down as:

Normally, this breakdown would be causing warning lights to flash in my brain, because consumer loans are unsecured.

That means the borrowers don't have to put up any collateral (as they would with a property loan): Ratesetter lends them money for a new kitchen or a holiday, and if they fail to repay there's nothing the lender can quickly and easily do about it.

How does lending work?

When you invest with Ratesetter, the amount you put in is matched directly with specific borrowers on the other side of the loan.

When you lend, you can choose to do so at the “market rate” or (as the name suggests) set your own rate. The market rate is effectively like the most recently quoted price of a stock: it's the level at which the last trade was made.

If you've ever used Betfair, it will look familiar: you get to see the supply and demand at different interest rates, and decide at what level you want to get involved. 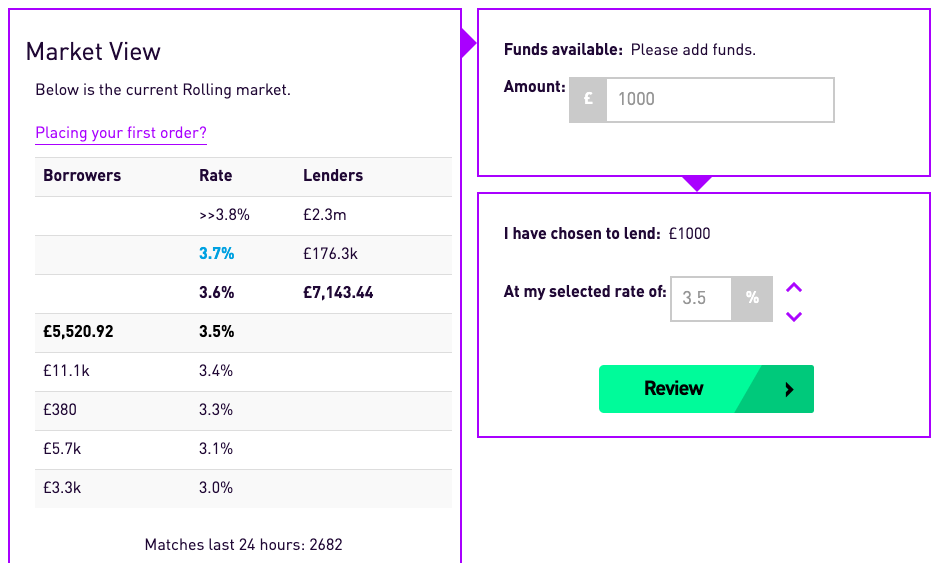 So if you offer below the market rate you can be sure it'll be snapped up instantly, or you can try your luck by asking for a higher amount – although your money might end up sitting there for a long time until it gets matched, if it gets matched at all.

In practice, despite the name, apparently only 7% of lenders set their own rate. Most are perfectly happy to avoid all the hassle of trying to match, and just lend at the market rate.

What lending options are there?

The nice thing about the 1-year and 5-year markets is you can still get early access to your money by paying an early access penalty. These penalties are set to roughly bring all the different markets back into line with each other: so if you planned to invest for a year but asked for your money back early, you'd end up in the same position as if you'd been in the rolling market all along.

How much interest can you earn with Ratesetter?

The nature of Ratesetter is that the rates on offer are always shifting, based on levels of supply and demand on the marketplace.

At the time of writing though, the rates are:

Conveniently, you can choose to automatically re-invest your capital and interest into new loans as it gets returned to you. As a result, over the long-term you'll find that the actual rate you receive fluctuates – because your re-investments might be at a higher or lower level depending on the state of the market.

Ratesetter is safe because of its “Provision Fund“. This basically pools risk between all lenders – so if you have a borrower who stops making repayments, the fund will immediately kick in and make up the difference.

The Provision Fund is Ratesetter's “special sauce”: it's how they manage to make unsecured consumer loans without an investor ever making a loss.

Basically, every time any borrower on the platform makes a repayment, a proportion of their repayment goes into the Provision Fund.

So, say you're unlucky enough to make a loan to a borrower who fails to make their first interest payment. No problem: plenty of other borrowers have been making their payments, so Ratesetter pays you from the Provision Fund.

Then say you're even more unlucky, and a borrower totally fails to repay any of the money they borrowed from you. Again, no problem: you'll get all your money back from the Provision Fund.

Pretty neat. It only becomes a problem if the level of borrower defaults ends up being far higher than forecast, and the Provision Fund runs dry.

To avoid this happening, Ratesetter maintains the fund at a level that's far in excess of their historic default rate. For example, net losses across the portfolio are currently approaching 4% – but the Provision Fund buffer is over 8%. So losses would need to be twice as high as expected before investors lost any of their capital. 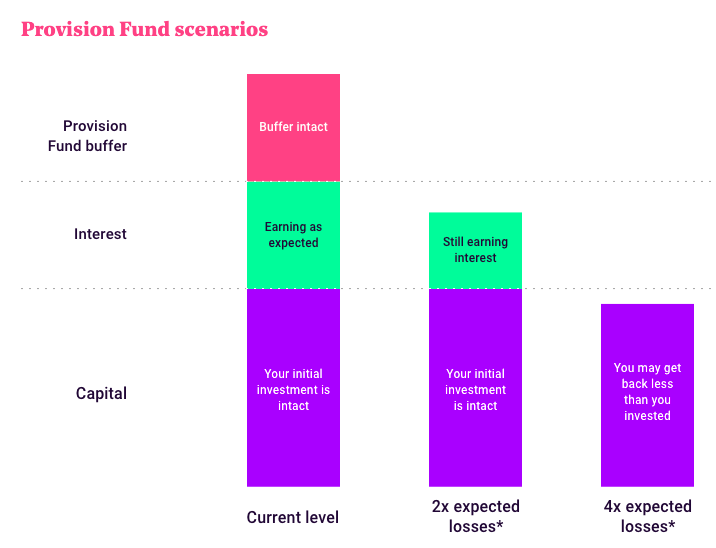 Of course, in a downturn it's possible that losses could quickly rack up and deplete the provision fund – after which point investors would have to bear any further losses.

You'd hope that Ratesetter would see this coming and make the necessary adjustments, but we'll talk about this more when we come to discuss risks later on.

The pros of investing with Ratesetter

Truly peer-to-peer, without the drawbacks

Ratesetter's model is pretty neat. You're genuinely entering into loans with actual individual borrowers, but because you can get early access you're not stuck in the loan until Mandy makes the last payment to pay off her £500 home improvement loan.

And if Mandy fails to make one of her £50 repayments, that's no problem either: the Provision Fund steps in instantly, so you don't even notice.

Because Ratesetter is one of the largest peer-to-peer lenders, it's always got lots of loans that have just repaid and lots of money waiting to be invested.

It cleverly manages this queue to give you access to your money whenever you want it. Quite sensibly, they don't make any promises: if the market suddenly dried up, you could end up stuck in loans until the borrowers repay.

At the moment though, you can easily get your money back within 24 hours if you want to.

Because its loan book is so huge, if you choose to invest at the market rate (rather than setting your own) you're likely to have your investment matched and start earning money instantly. This eliminates “cash drag”, which can otherwise reduce your portfolio's performance.

Extremely easy to use

Put some money in. Choose from one of the three different accounts. Done.

Ratesetter does have more advanced options if you want more control, but its simplicity is great for most ordinary investors.

Anything that comes back in is re-invested (unless you choose otherwise), so you'll stay fully invested and benefit from the compounding of your interest.

You can even set up a regular monthly investment amount to be taken directly from your bank account, if you want to.

Ratesetter is spectacularly transparent. I don't have any insider knowledge to quote the figures throughout this article: Ratesetter publishes them all for anyone to look at. 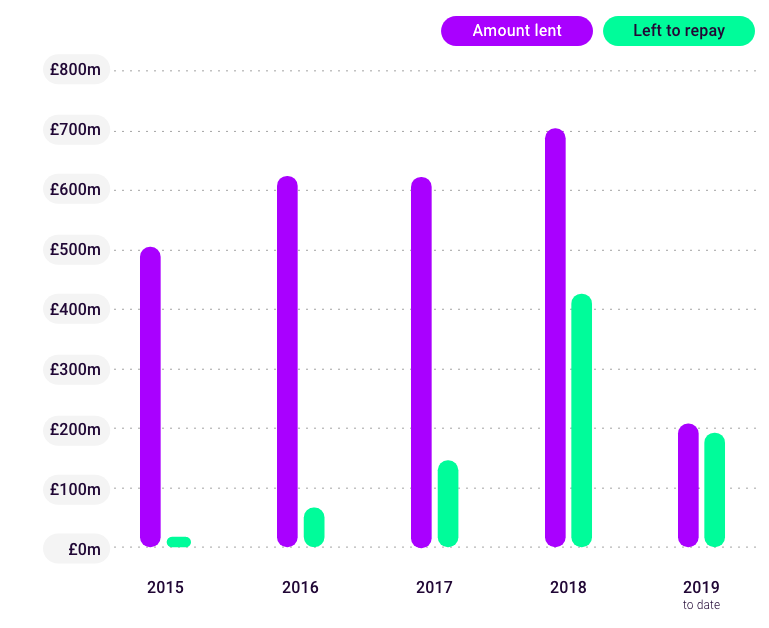 They've also been transparent about their failures. In 2017 they lost a lot of money by making ill-advised loans to other lending businesses (which they no longer do).

The company used its own money to pay investors back, and they were very open about the mistakes they made. No business gets it right all the time, and I'm always impressed when someone is honest about it and does the right thing to fix it.

There's tax to pay on the income you make from peer-to-peer loans – unless you wrap them within a peer-to-peer ISA.

Ratesetter offers an ISA option, so if you haven't already used your allowance elsewhere you can keep all your income without forking any over to HMRC.

Unlike other lenders with higher minimums, you can have a dabble and see how things work with as little as a £10 investment.

The drawbacks of Ratesetter

Like I said, no company is perfect. I've found the investment process to be faultless, but there are some concerns worth noting about its overall model.

The company itself is loss-making

Ratesetter as a business made a loss of £21.5 million in 2018. That's not a worry in itself: it's common for businesses to spend years operating at a loss while they try to build a dominant market position (see also: Uber, Amazon).

Ratesetter is backed by some heavy-hitting investors and is extremely well-capitalised, so it's not likely to run into trouble any time soon. Nevertheless, the biggest risk in peer-to-peer lending is the platform itself going out of business – so I'm always happier when I see it's making money. This is something I like a lot about Assetz Capital, for example.

It's not been tested by a recession yet

You could make this argument for any peer-to-peer lender, with the possible exception of Zopa. But Ratesetter is more of a concern than some other platforms because of its focus on unsecured consumer lending.

A recession won't be pretty for any lender. But if a loan has been secured against property, it should (in theory) always be possible to sell the property to get your money back. On the other hand if lots of consumers are simultaneously unable to make their payments, there's not a lot you can do about it.

You'd expect Ratesetter to see the early warning signs and boost the Provision Fund accordingly, but it's a risk all the same.

I've been using Ratesetter since July 2017, and I've got a five-figure sum with them at the moment.I love it, because it allows me to be spectacularly lazy.

I put money in.

That interest gets automatically re-invested to earn more interest.

I don't care about picking different rates, or what's happening with individual borrowers. I can go months on end where I forget I even have money sitting there.

I put everything into the rolling market, which is probably a silly thing to do. Given that I've never taken any money out, I'd have been better off using the 1-year market: even if I'd changed my mind, I could have got early access without losing out.

But still. 3.5%-ish returns with absolutely no effort isn't too shabby.