Let's start with a big claim: I believe that the 18-year property cycle is the most powerful concept you can know about as a property investor.

Why? Because once you understand the property cycle, you’ll know:

In short, a lot of facets of property investment that seem random or uncertain will suddenly make a lot more sense. With this knowledge you can at least avoid making the wrong move at the wrong time that would put your portfolio in jeopardy – and at most, you can make it a central pillar of your investment strategy.

You could just take my word for it when I say that property is cyclical – but you won't be convinced enough to take action based on it until you've fully grasped the logic for yourself.

It's sometimes easier to understand this concept visually. Property Hub University has a free video course on the 18-year property cycle that's well worth checking out.

So we'll get to talking about how you can use the 18-year property cycle to make better investment decisions – but first, we need to get into the economics that underpin it…

Why is there a property cycle?

In pretty much every market other than land – whether it’s goods like cars, or labour like hairdressers – the forces of supply and demand keep prices roughly in balance.

If we all become more vain and start having our hair cut every day, it will be impossible to get an appointment and hairdressers will raise their prices to profit from those desperate enough to pay more for their coiffure.

Soon, these higher prices will attract new hairdressers into the market, and the extra supply will mean that everyone has to reduce their prices to remain competitive.

I’m not sure I’d want to have my hair cut by someone who’d only just entered the market because they saw how much money they could make, but that’s by the by: the point is that supply and demand work in tandem to keep prices stable over time.

In the land market though, this can’t happen because the amount of land in existence is fixed: you can’t just magic up a load of extra land if demand for it goes up. (Yes, you could relax planning restrictions, but this is so politically fraught it doesn’t usually happen. And in any case, demand is normally concentrated around established locations.)

As a result, when the economy is growing and there’s demand for new homes, shops and factories, that extra demand will push prices up. And because there’s no supply mechanism to pull prices back down, land prices increase faster than wages and the price of goods.

(For the geeks, this is related to Ricardo’s Law of Rent, and it explains why rents account for an ever larger share of the economy over time.)

It doesn’t take people long to realise what’s happening and see that they’ll get the best return on their money if they put it into property (as a proxy for land). At times of particularly high demand, people “speculate” by buying property on the assumption that the price will continue to go up.

Because property prices increase faster than wages do, property eventually becomes unaffordable for the majority of people. When this happens, the bust comes: property prices plummet, causing chaos for the banks (which have been lending money secured against high-priced property). The banks withdraw lending, building activity stops, and businesses shut down – which all have obvious knock-on effects for stock markets and employment levels.

Eventually of course, prices drop to a more sustainable level and everything gradually goes back to normal – at which point the whole cycle starts again.

Importantly, each cycle starts from a higher “bottom” than the previous one – so the long-term trend is always upwards, even though there’s a lot of volatility along the way.

That, in a nutshell, is the property cycle. It would be more accurate to call it “the land cycle”, because the cost of building a house on a piece of land is much the same in London as it is in Leeds, and won’t cost more in 100 years (other than inflation) than it does today. But house prices are more accessible to us than land prices, so we can “read” property prices to tell us what’s happening in the land market – and therefore what’s ahead for the wider economy.

The stages of the 18-year property cycle

The economist Fred Harrison was one of the first people to identify the existence of the property cycle. He traced it back for hundreds of years to conclude that the length of a full cycle averages out to 18 years, with each cycle divided into distinct stages. 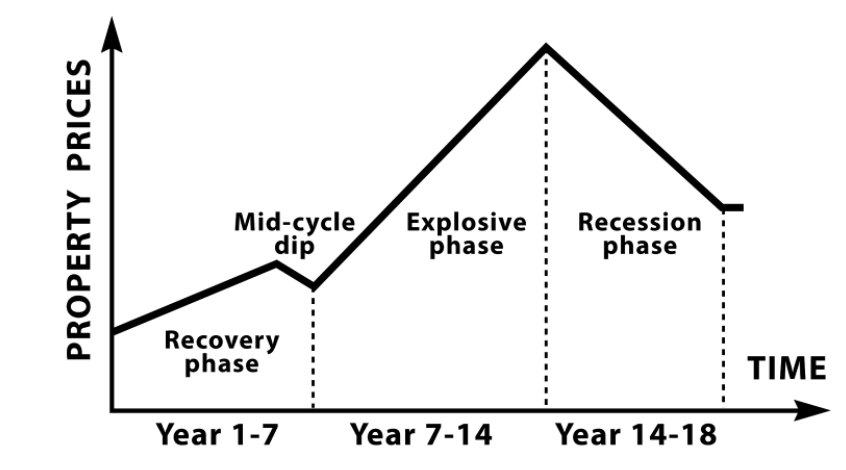 Chances are you'll have a memory of at least one complete property cycle – possibly more. As we talk about the indicators that signify each stage, you’ll probably be able to think back to the clues that were there, in retrospect, in cycles you’ve experienced in the past.

This is critical because if you don’t look for your own evidence, the media will lead you astray. After all, in 2006 did you see more headlines saying “Quick – you’ve got a year or two to sell everything!” or “How to get the best rates on 110% mortgages”? As we’ll see, at every stage, the professionals who are watching the signals act very differently from the amateurs who are watching the media – and they get far better results.

So, let’s take a look at each stage of the cycle, what drives the shift from one stage to the next, and what different types of investors are thinking and doing at each point…

How can we profit from the property cycle?

So we've learnt that property is cyclical, and looked at the four stages it goes through during each cycle. All very interesting, but how can we use this to invest more successfully?

Let’s start with an implication that sounds mundane but is actually very important: property is cyclical, therefore prices surging and falling back are nothing to be overly concerned about.

If you only listen to what the media says, the message is always “everything’s great!” or “everything’s terrible!” – and it can seem totally random as to which is the case at any given time. It’s reassuring to know that it’s not random at all, and it’s driven by fundamental economic principles.

The next implication is that if the cycle moves predictably through its four stages, you can see what’s coming next. Even if you don’t know precisely when something is coming, knowing that it will come makes a big difference. For example, you’re less likely to panic and sell at the bottom of the market if you know that prices won’t fall forever – they will inevitably recover.

Fred Harrison claims evidence going back hundreds of years for the cycle’s duration averaging 18 years, but I prefer not to dwell on the exact timing. 18 years is an average, so could easily be off by a few years in either direction.

Getting hung up on the exact duration of the cycle is a distraction. Just the fact that there is a predictable cycle (of any duration) is the point, and you can see the stages progressing even if you don't know how many years have passed.

You can gauge where we are now (and therefore what’s coming next) by looking at signals out there in the world.

For example, are you seeing more and more cranes as you walk around town, and prices seem to be taking a bit of a dip after a few years of slow and steady growth? Then you could surmise that we’re well into the recovery phase, and you can strap yourself in the explosive phase yet to come.

We’ve also seen that the “smart money” and the amateur investor behave differently from each other throughout the cycle. For example, just as casual investors are lining up a huge mortgage to grab their piece of the boom, those in the know are quietly selling their stock and stockpiling cash for the crash to come. In other words, most people buy high and sell low – exactly the opposite of what they should be doing.

Rules to profit from the 18-year property cycle

I can’t promise that knowing about the cycle will give you the degree of knowledge and mental toughness you need to buy at rock bottom and sell at the very height of the market.

And nor do you need to – remember, each cycle starts at a higher level than the previous one, so “buy and hold for 20 years” is still a perfectly valid strategy. What’s more, if you sit around for years waiting for prices to fall, you’re missing out on a lot of income.

There are, though, four very basic “rules” you should follow as an investor – and now you know about the cycle, it should be easier for you to do so:

Just stick to those basics and you’ll already be doing a heck of a lot better than most amateur investors. But if you want to push it even further, there are some more advanced options that knowledge of the cycle makes possible:

Hang on, didn’t I just say that remortgaging in the winner’s curse phase was a terrible idea? No, only if you’re using the equity you release to buy overpriced properties or fund your lifestyle. If you put the cash in the bank, you can use it later to buy properties at a discount – or just repay the money if you change your mind.

Where are we in the current property cycle?

Well, I'm not going to commit that to paper (err…pixels?) because of course the answer changes and I doubt I'll remember to come back and update this article.

So instead, listen to The Property Podcast regularly where our monthly “market update” episodes rarely fail to mention the property cycle. We also record at least one dedicated episode per year about where we are in the cycle now, so watch out for those.

So, I hope by now you’re a believer in the wonders of the property cycle. You don’t have to scrap “buy and hold” and start timing the market instead – although you can if you want to. Even if you just stick to the very basics, you’ll do very nicely indeed.

The main takeaway is that a crash is inevitable: at some point during your time as a property investor, prices will fall – and do so quickly.

In my book, The Complete Guide To Property Investment, I dedicate a whole chapter to how to survive a property crash. Click here to buy it on Amazon.

In which I attempt to predict the future, and will probably look silly...