Where in the UK is there room for house prices to rise?

One of my main hobbyhorses over the last couple of years has been how regional differences always seem to get overlooked in discussions of house prices and rental affordability.

I'm even starting to bore myself now, but buried on page 28 of a report on living standards from the Resolution Foundation, there's a graph that I think tells an important story – and gives me the perfect excuse to bang on about it again.

(The whole report, by the way, is basically describing the “disappearing middle class” phenomenon. It's enormously depressing, but worth reading.)

This graph shows – broken down by region – how average incomes, private rents and house prices have changed since 2006:

There are four regions of England where both house prices and private rents have risen faster than average earnings over the last ten years: London, the South East, the East and the South West. This is consistent with what we're usually led to believe is the case for the whole country.

But in the Midlands and above, earnings growth has been faster than growth in house prices and private rents. That means that both renting and buying have become more affordable in large parts of the country. 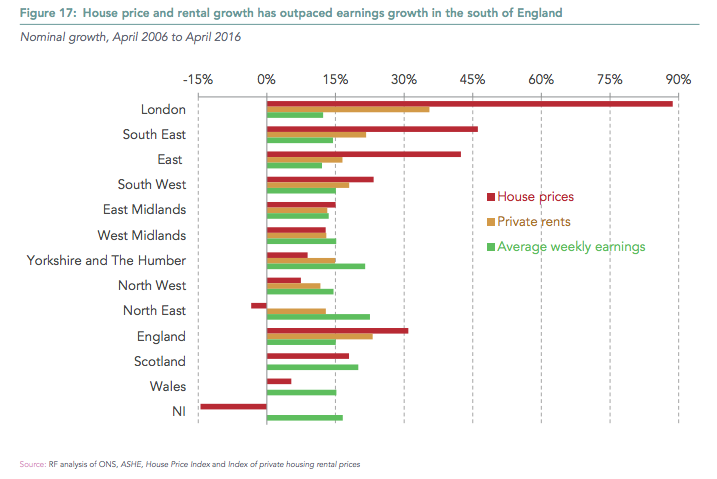 And for Scotland, Wales and Northern Ireland there's no rental data available, but average earnings have grown faster than house prices in every case.

So what does this mean?

Rents in London seem unlikely to rise until wages do

As I've noted in the past, landlords don't really set the rent: the market does. If there are more people wanting to rent than there are properties for them to occupy, prices will naturally rise until those able to pay the least are priced out.

But this can't happen indefinitely: each person earns only a set amount, and they can only allocate a certain proportion of their earnings to rent so they can still afford food, transport and so on.

The graph shows that private rents have risen radically more quickly than incomes over the last ten years – which can only mean that renters must be allocating a higher proportion of their income to rent than they were before. And they are: this article summarises data showing that Londoners spend 62% of their pre-tax income on rent, up from 49% in 2010.

So the question is, how much higher than 62% can it go? I'd say “not very” – and I'm hearing anecdotal evidence of London landlords being forced to cut rents. That means rents can't meaningfully rise until incomes do – and while incomes are now starting to rise slightly after a long period of stagnation, as there's little headroom it seems likely that increases will be slow.

The same goes for house prices

The increase in London house prices beyond earnings is even more dramatic than the case of private rents. (This also demonstrates the degree to which London distorts the national picture when regions aren't split out.)

Could they increase further? You might argue that they could, because there are lots of factors in the capital beyond just incomes: overseas buyers, for example, often buy in London as an investment and can still afford to do so even if prices are beyond the reach of locals.

But is it likely? Given how far prices have run away from earnings, it looks to me like they're going to hit a ceiling. And even if prices rise further, driven largely by the use of London housing as an international store of value, it leaves prices very vulnerable to any global events that could cause this capital to be withdrawn.

Rents and house prices outside London have room to increase…

In the Midlands and above (and in every country in the UK except England), wages have increased more than private rents and house prices over the last ten years. That means affordability has improved – even before taking into account the fact that mortgage rates are lower than they were ten years ago.

So people in these areas should, in theory, be able to afford higher rents and higher house prices than they're currently paying. This means that, unlike in London, there's headroom for prices to increase without the average earner getting squeezed out.

So there's room for prices to increase…but they need a reason to do so. That reason would come in the shape of more competition for housing – that is, an increase in demand relative to supply.

What will increase that demand? More (and better paying) jobs, and better transport links to employment centres. That's where initiatives like the Northern Powerhouse come in. If they're successful in tempting employers away from London and creating regional jobs, demand for housing should increase and therefore so should rents and house prices – because the headroom exists for them to do so.

In this article I've only been talking about regions relative to each other – there are any number of political and economic reasons why prices could rise or fall across the board.

But even within that narrow scope, I think there's an important point.

In my opinion, excessive house price and rent inflation in the southern regions is a direct consequence of a London-centric economy. While the economy is unbalanced in this way, prices in the south will always be strained.

But my point is that there's a limit to how far prices can run ahead of incomes, and we now seem to be testing that limit. Just because price growth has been faster in the south than elsewhere over the last decade doesn't mean that's bound to continue – in fact, I think it's less likely to continue.

Look at the data, form your own opinions, and use those opinions to guide where you invest next.

Or just don't worry about it at all, and focus on buying properties that are clearly great deals. That works too.